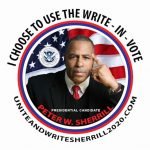 United States of America needs to be less divided and start standing on common ground. “Unity makes strength” is a motto that has been used by various states and entities throughout history. American citizens need to unite and make America secure again.

Peter W. Sherrill, a former Director of Homeland Security and Civil Defense, has trained extensively with First Responders throughout this Nation for the War on Terror and in Weapons of Mass Destruction (WMD’s) is determined to eradicate terrorism and committed to securing America and its borders. In addition, his twenty-five years of experience in Corporate America is the foundation for his America First Initiative (AFI).

Our Nation’s Security is in serious jeopardy and our credibility with our allies and even our “Elite Agencies” (CIA & FBI) have been compromised and humiliated by our current President! The fact that we have had four National Security Advisors, and four Secretaries of Homeland Security are a major issue to and for the people of America and a major threat to our National Security! Being President is one thing, however, being Commander in Chief of the greatest Military Forces of the entire world requires the tact of Patton, the wisdom of Eisenhower as Supreme Commander and the courage of MacArthur, the American Caesar, who reigned in Asia! We can no longer afford temperamental leadership of our Armed Forces to place our brave men and women in grave danger because of incompetence and ineptitude! Our Borders remain unsecured and “Domestic Terrorism” continues to be a major problem under the Trump Administration because of his support of hate groups like in Charlottesville!

Our Economy appears strong, however, it is very fragile. One indication of a “rate hike” from the Feds and our stock markets will plummet! The “Average American Taxpayer” which represents 90% of Americans are still one paycheck away from financial disaster. After the American Taxpayer has financed another bailout for Corporate America of a trillion dollars, the American Taxpayer has not received a real Return on Investment, (ROI). Albeit something has to be done to deal with the trade deficit, especially with China, threatening tariffs is only a temporary solution. Our goal is to make America’s economy self-sufficient and return to a period in time when America’s industry was “America Strong.” That means Steel, Coal, Oil & Gas and especially the Automotive Industry. We need to focus on increasing our productivity and lessen our dependency on foreign products, especially in the Automotive Industry! Corporate America owes a debt to the American worker and stop rewarding our hard working American citizens with layoffs and part-time positions that do not allow them to qualify for health care and benefits! Any industry laying off American workers and hiring illegal aliens will face severe penalties by my administration!

My Administration is 100% committed to our men and women of the Armed Services. We will not stand by and see one Veteran be homeless and not receive the medical attention that is needed because of the horrors experienced during combat! We will also ensure employment for every Veteran when returning from combat, no matter what the costs! If we can spend nearly a Trillion Dollars for our Defense Budget for the Pentagon, and give Corporate a Trillion Dollar Tax Cut, then we can ensure that our Veterans will be taken care of and given top priority for their commitment to America’s safety and Democracy!

While the current administration continues to deregulate for the sake of corporate profits, we cannot allow this reckless, irresponsible, extremely hazardous, destructive and grossly negligent agenda to continue at the risk of our environment. I do understand why corporations are opposed to these regulations, because it adds to the costs of doing business and competing against companies in China and India who continue to cut corners and sell low priced goods. However, do we want to be walking around with masks on our faces like in Beijing, China and New Delhi, India? We will reinstate the EPA and we will vigorous continue to do projects that make us more efficient, but America, you have a part to play in this also! Do you realize how much drinking water from plastic bottles impact the environment? Do you recycle? Do you buy American made products produced in the USA? This in conjunction with our highly efficient economic plan for America to revolutionize the auto industry, thus impacting the US Steel – Oil & Gas and evening Coal, will change the “Carbon Footprint” of America and the world – making America the leading producer of goods and services to the world!

Let’s make one thing perfectly clear! Entering into the United States illegally is not an option and the consequences will be serious! Our Borders will be secured and nothing illegal will be entering through our borders! We will be seriously locking down our borders and any family member in America who has knowledge or are complicit with anyone entering in our country illegally or bringing drugs into our country, will jeopardize their entire family from ever entering this country, plus face deportation of their entire family from this country!

We need to focus more on gun safety! We need to educate people on the serious responsibility that comes with gun ownership! Actually, given the serious new threat from terrorism America is now facing because of asinine policies implemented by the current administration, we are going to have to make sure we are more prepared than ever before, to deal with this threat on American soil!

Our Foreign Policy will be based upon re-establishing relationships with our allies who support Democracy and Freedom! Dictators, Communists countries and those countries that abuse women’s rights are just as bad as those who supported Apartheid in South Africa! We will not be doing business with you and we definitely will not be selling weapons to our enemies or to enemies of our allies, especially enemies of Israel!